How Do I Know if Roomba is Charging?

As an Amazon Associate, Robovac may earn from qualifying purchases.

It can be a real pain when you go to send your Roomba about its business around your home, only to find that while it looked like it was on the dock, it wasn’t actually charging at all. This is the kind of problem that only tends to arise when you’ve had your Roomba for a while. Remember the excitement when you first took your Roomba out of the box? You undoubtedly picked out the perfect spot, followed the manual to the letter with positioning the base unit, gave it plenty of clearance and everything else to make its life as easy as possible. And then the same thing that happens with driving happened – you got comfortable and complacent!

My colleagues and I have covered various issues related to Roombas and their batteries in the recent past, such as coverage of common Roomba error codes and what to do if your Roomba won’t charge, but we haven’t talked about identifying the issues and having a chance to deal with them ahead of time.

The chances are your Roomba looks something like this: 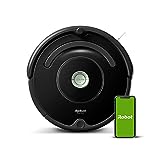 Above the buttons and towards the front of your device, you’ll find a screen – although that might not be clear when you first turn the device on. I’ve used a picture of the Roomba 671 here, but the fascia on your robot vacuum is something that doesn’t change all that much. Your battery indicator is represented either by a battery icon on the screen or a light ring around the buttons.

In most cases, a quick tap of the ‘Clean’ button will turn on the screen or ring indicator. In most cases, you can rely on the traffic light system – if the battery indicator is green, you’re fully charged and good to go. If it’s orange, then it’s not yet close to full, and if it’s red, you’re not going to get any vacuuming done any time soon.

On the 671 and most other modern Roomba models, the critical thing to look out for when charging is whether the battery indicator pulses. If it’s green and not pulsing, you don’t have anything to worry about as your Roomba is fully charged and good to go – it intelligently stops charging at this point so as to reduce battery degradation.

Conversely, if it’s red and not pulsing, it’s dead and won’t be coming back to life any time soon. This could require a reset of the device, or simply removing it from the home base and replacing it. If neither of those solutions works, I’d point you in the direction of the aforementioned article on what to do if your Roomba won’t charge.

Don’t Worry if the Lights Go Out on Your Roomba

You might be concerned about whether or not your Roomba is charging if the screen or ring indicators come on and then go off again. This is an intentional power-saving feature that acts much like a phone screen – the indicators don’t stay on all the time as it’s a waste of electricity. If everything looks fine when you tap the ‘Clean’ button and the screen quickly goes off again, then you have nothing at all to worry about.

The same applies if your Roomba’s home base also has an LED. This will turn on when the Roomba arrives at or is placed on the base, and will remain solid for around four seconds before going off again. If you’re concerned that any charging issues you might encounter are due to the base rather than the Roomba itself, try removing and replacing the robot. If the LED on the base unit flickers, then you may have an issue with the connection between the base and robotic vacuum. Such issues are also covered in the Roomba won’t charge article.

Amazon and the Amazon logo are trademarks of Amazon.com, Inc, or its affiliates.